Today is our 21st birthday. The Dental Channel was formed on 19 November 1998, two months after a certain company called Google was incorporated.Our aspirations were somewhat more modest, seeking to develop e-learning resources that would help dentists keep up to date with 'best practice', but nonetheless pioneering and innovative. So much has changed since then, especially on account of the rapid advances in digital technologies, that it is easy to forget how significant these have been.

Back in the day

In 1998 dentists were the only category of GDC registrant and mandatory CPD was a twinkle in the GDC's eye. There was no CQC. Radiographs used film. Amalgam was the most widely used restoration. Most dentists kept up to date by attending local meetings, conferences and reading journals. Computers offered the unique ability to participate in self-paced learning that integrated a wide range of media (searchable and cross-referenced text, audio, video, animation, 3D graphics and interactivity) without having to travel. The Department of Health recognised this, funding the development of a range of peer-reviewed titles. We developed a series that were the first to combine all these media types. They were distributed via the regional deaneries and were very well received, although there was the occasional hiccup. One deanery initially refused to carry Pulp Fiction (guess what that was about) because an administrator thought they were being offered boot-legged copies of the Tarantino film of the same title! 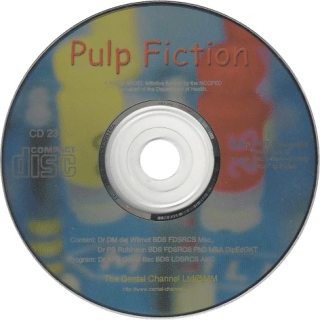 Pulp Fiction: our first e-learning title released in 2000. It did not star Samuel L Jackson, John Travolta or Bruce Willis.

The Internet was rudimentary in comparison with today, accessed via dialup connections. It was often referred to as the World Wide Wait with good reason. One song could take anywhere from ten minutes to hours to download. Now it is a split second. This was why our first titles were delivered on CD-ROM. Matters changed with the advent of always-on broadband, and in 2006 we piloted the use of live online meetings to complement our self-paced CD-ROMs. The technology allowed the traditional evening lecture to be moved online. Now dental professionals did not need to travel, and costs were slashed. I confess though to ageing every time I ran a webinar in the early days. Broadband speeds were highly variable across the country, which could make for some interesting experiences. But now 'webinars' are commonplace, and we have been running a monthly programme ever since. 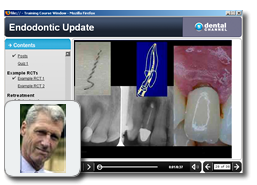 Change all about I see

If you want to see how much change there has been over the last 21 years our 2019 webinar programme is a good place to start. I asked our presenters to reflect on key changes in their subject areas and they kindly obliged. John Rhodes' rather appropriately titled "Back to the future: the evolution of endodontics since 1998" showed how technology has improved along with outcomes but the principles have remained largely unchanged. Claire Nightingale compared audits over the period of orthodontics and orthognathics with some remarkable results.There have been significant changes in the business of dentistry, as discussed by Alon Preiskel (The good, the bad and the ugly of corporate dentistry) and Simon Hughes (The rapidly evolving dental market). Regulations, laws and guidelines have increased dramatically. Mike Wheeler discussed the provision of oral care in care homes, a subject that is so often neglected. Raj Rattan illustrated how risk management has evolved and how to prepare for what is around the corner.Caroline Pankhurst expertly discussed the drivers for change in infection control, illustrating numerous improvements over the period, why new laws and guidelines have been introduced and how experiences help us prepare for future challenges that are bound to happen.I was concerned to note that a temporary rise in TB incidence coincided with the formation of The Dental Channel, but relieved to find no correlation! Saman Warnakuasuriya, an internationally renowned expert in oral cancer and with whom I worked on two of the original CD-ROMs titles and various other initiatives, provided an update in early detection and prevention.This is a field in which there has been a rise in incidence in younger people but initiatives such as Mouth Cancer Action Month have helped raise awareness. And for our anniversary month James Wise, doubly-qualified as dentist and dental technician looked at digital technologies and their impact. If you want to learn about the benefits but also the real dangers and missed the webinar, look out for the on-demand presentation when published next month.

What might the future hold for CPD? In 1998 there was very little in the way of e-learning or online CPD. Now there is a glut, and much of it free. This is compounded by "fake news" and privacy concerns of the online world.The introduction of mandatory CPD saw a rapid race to the bottom in standards that the GDC, despite its best intentions, has failed to address. It is embarking on further changes to the CPD scheme and talks much about quality assurance and "ownership", but based on its history it hard to believe that these will be anything other than window dressing. The key is choosing your CPD wisely and assessing its effectiveness. Ultimately it is dental registrants who will drive up standards.

We have much to be grateful for. I have been truly fortunate to work with many subject matter experts who have been exceedingly generous with their time and expertise, keen to share their knowledge and skills in improving the practice of dentistry. For that is what we are about, providing authoritative evidence-based resources free from commercial bias.This has been reflected in the numerous awards for our e-learning titles and services, created by a very small but skilled and effective team. We won these because we were able to provide the evidence, and that evidence was provided by all those dental professionals, dentists and DCPs, who have used our resources and provided extensive feedback for us that we have used to improve. So, to all our subject matter experts, members and supporters from the dental industry a heart-felt thank you. Without you none of this would have been possible. Let's look forward to whatever the next 21 years has in store! 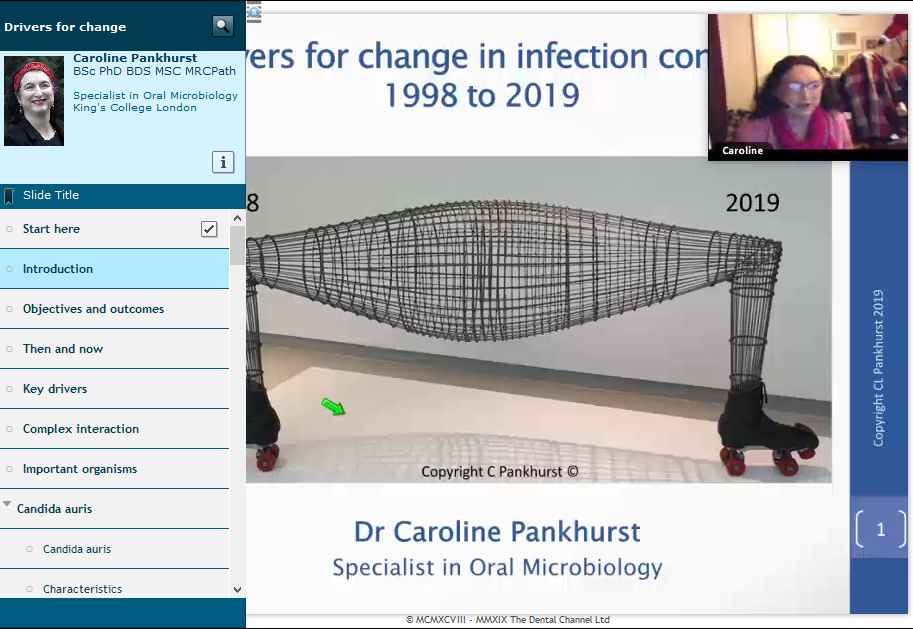 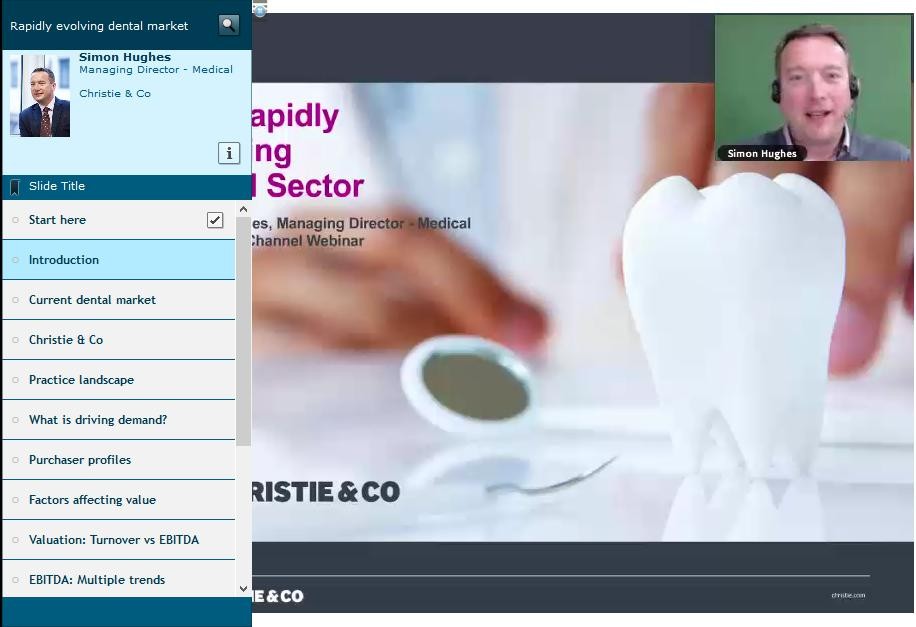 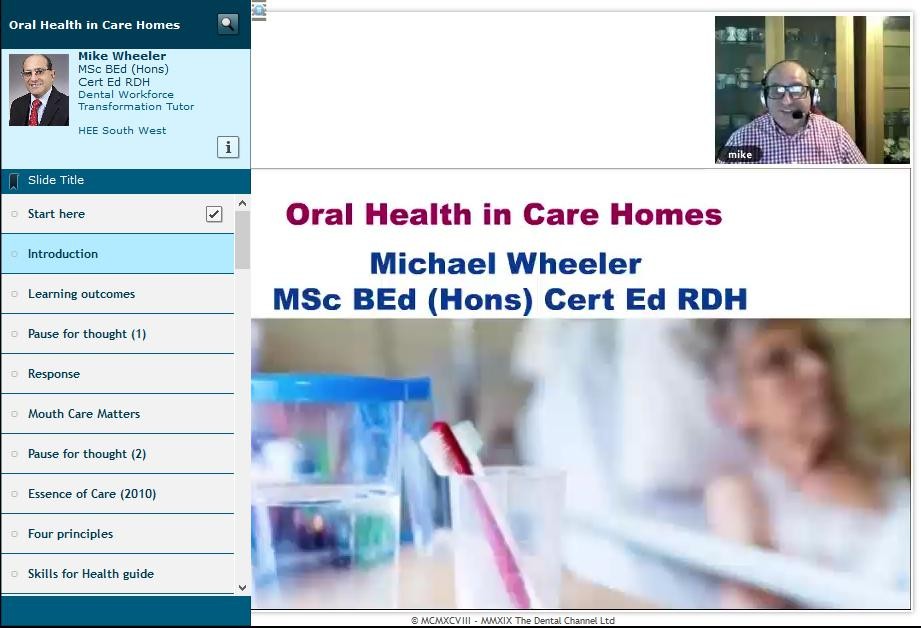 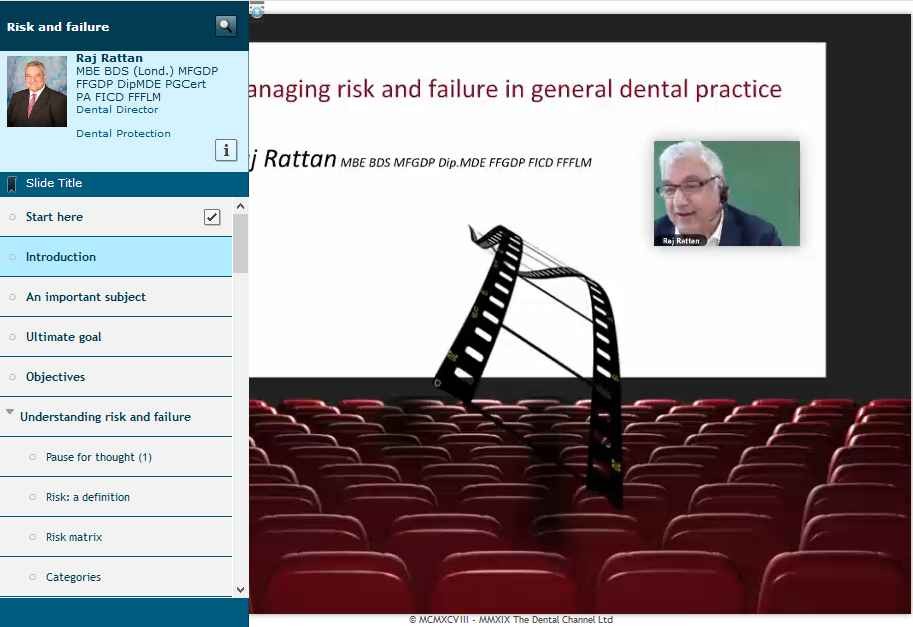 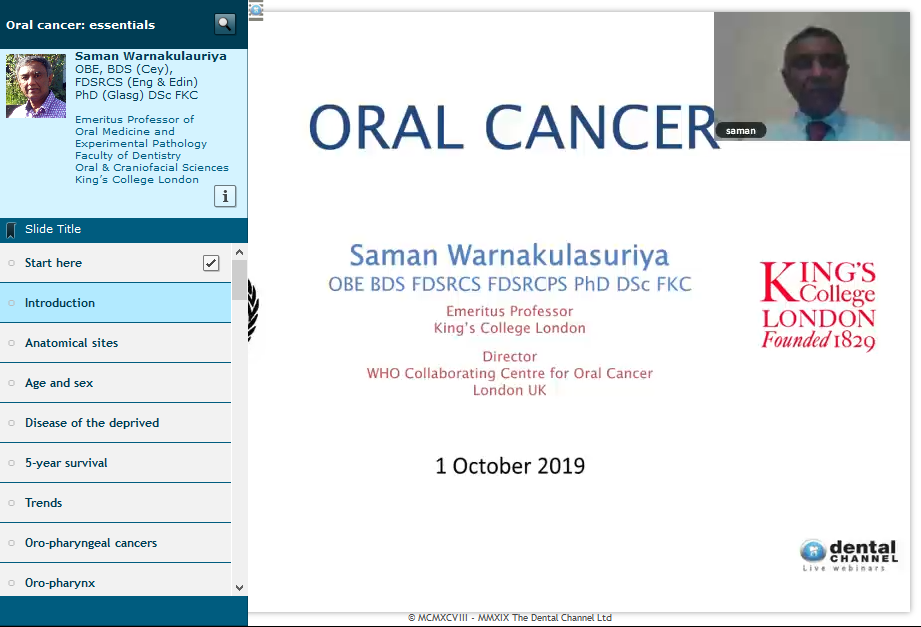 Early detection and prevention of oral cancer: a guide to the essentials (Saman Warnakulasuriya, October 2019) 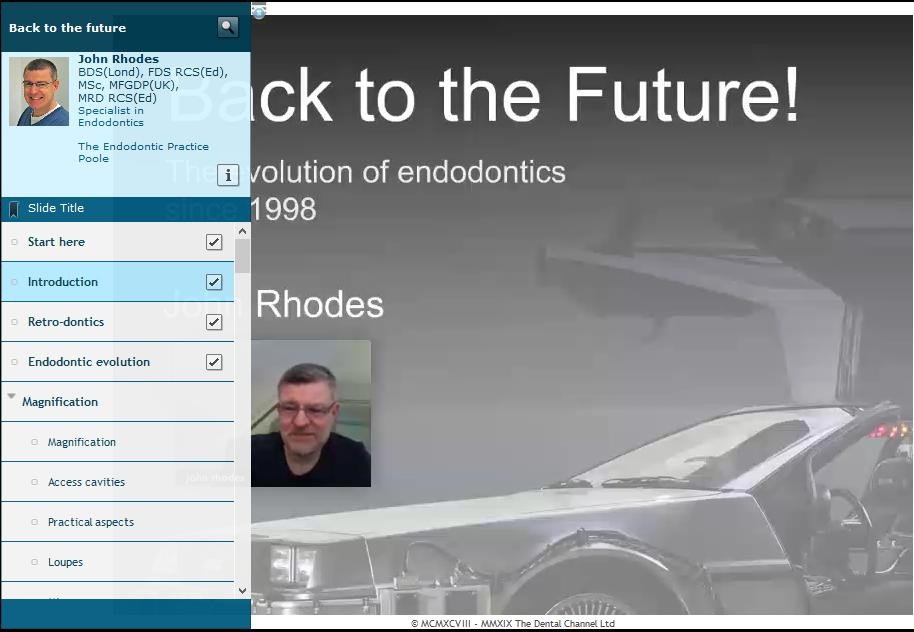 Back to the future! The evolution of endodontics since 1998 (John Rhodes, February 2019) 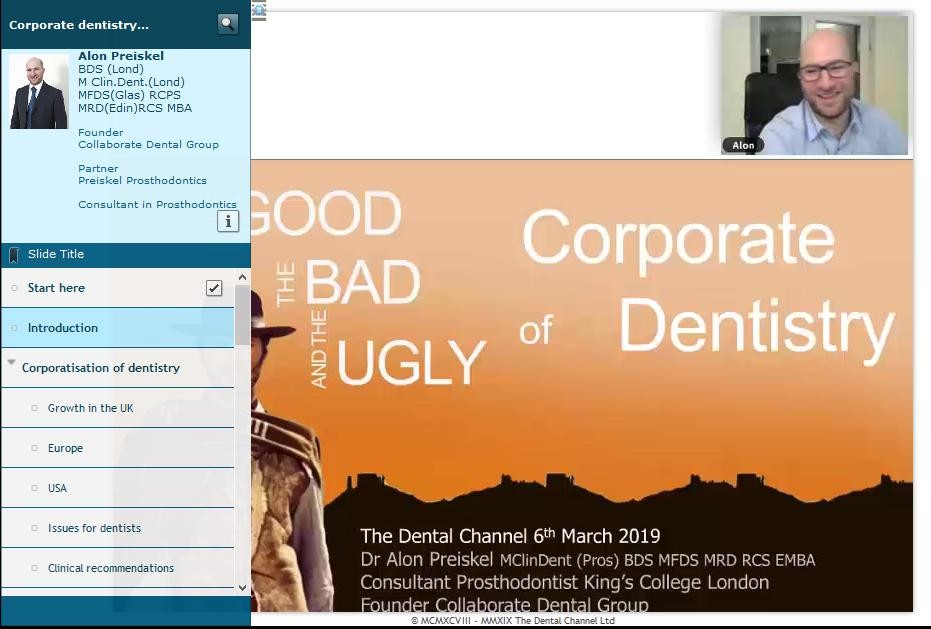 The good, the bad and the ugly of corporate dentistry (Alon Preiskel, March 2019_ 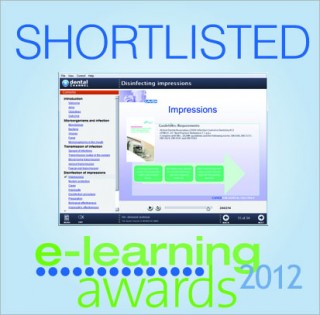 Finalist: The Early Detection and Prevention of Oral Cancer

Founder and owner of The Dental Channel. Clinical teacher in paediatric dentistry at King's College London Dental Institute. I wrote my first e-learning program in 1992 whilst working as an SHO in paediatric dentistry at King's College London, and then went on to work in all sorts of IT projects outside of dentistry. The Dental Channel was established in 1998 to develop e-learning courses for dentistry so I could combine my profession with my interests in IT. The first titles were developed for the Department of Health, and won numerous national awards. In 2006 the company pioneered the use of live web-based training, running monthly events since. I completed a Masters in Clinical Pedagogy at King's Learning Institute in 2015.

More posts from author
Friday, 01 April 2022 Aims, objectives and outcomes: What they mean and why you should care
Friday, 25 February 2022 Simplifying our CPD membership
Monday, 17 January 2022 Looking forward to 2022

@dentalchannelukThe Dental Channel
OSA is the most common type of sleep apnoea. Dentists can help. https://t.co/mXVcoweqxK
Link to post

@dentalchannelukThe Dental Channel
The Dental Practicality Index – assessing the restorability of teeth (BDJ). Referred to in our course "Endodontics:… https://t.co/Kw7dleumYf
Link to post